Kent, Anger and Knight start season 2018 with a bang

Queensland Touring Car Championship | Classes A1 and A2

Steve Hay, Murray Kent and Garry Anger all enjoyed success in the two A Classes, during the opening round of the Racer Industries Queensland Touring Car Championship. After a summer restructure, the new-look series launched with the usual suspects, Murray Kent and Steve Hay, doing battle for the outright win. Both men had blistering pace across the course of the weekend, and came away with two victories apiece, but it is Murray Kent who sits on top of the points table going into the second round of the championship, at Queensland Raceway next month.
In Qualifying. Steve Hay set the track alight, with a 56.9105, to claim pole position, ahead of Kent (57.5057) and Ashley Hooper (58.0601).
Neville Haines was the best of the Class A2 field, ahead of Stuart Walker and Gary Anger, in a Commodore lockout.
The opening race was contested over ten laps, and right from the start, it was a two-horse race, as Hay and Kent cleared out in pursuit of victory. Ashley Hooper was left to run a quiet race, on his way to third position. Murray Kent recorded the fastest lap of the race, but Steve Hay did enough to hold on for the win – the perfect start to the campaign, as he sets about regaining the #1. 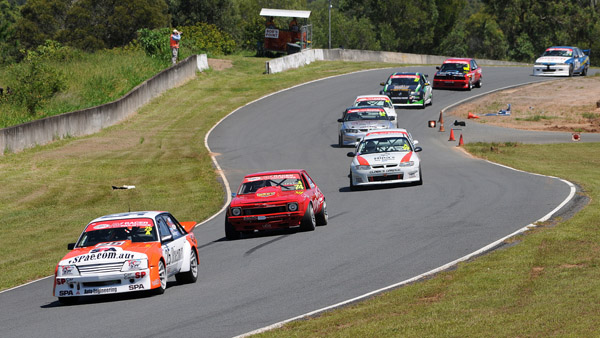 In Class A2, Gary Anger moved from third to first, and took his first class win of the season, ahead of Haines and also Adrian Blackwell, who got the better of Stuart Walker. Walker slipped from second to fourth in the opening 10-lap race of the weekend.
Murray Kent bounced back to take victory in race 2, as he took advantage of the misfortune of Steve Hay. Hay’s ongoing mechanical issues continued, when his commodore started leaking oil. Rather than risk it, Hay stopped on the side of the circuit, and retired from the race.
Kent was a comfortable winner, from Ashley Hooper, and then it was a long way back to the rest of the field. Third was Gary Anger, who scored the win in Class A2, ahead of A1 competitors, Neville Haines and Pierz Harrex. Stuart Walker was sixth, which was good enough for second in A2, ahead of Adam Pye.
With Steve Hay charging through from the back of the field, Sunday’s opening race – the third of the weekend – was always going to be quality viewing, and it lived up to the hype.
There was high drama on the opening lap, with multiple cars coming unstuck, either at the carousel, hungry or eastern loop, but the race stayed green, and by the end of that opening lap, Steve Hay was sitting sixth, and charging towards the pointy end of the field. By the end of the third lap, the 2016 champion was third, and all of a sudden, an unlikely victory was a potential outcome. Murray Kent did eventually hold on though, to take his second win of the weekend, with Hay a mere 1.1 seconds back, at the completion of the 10-lap race.
Hooper cruised to third. Behind Hooper was the battle for Class A2 honours, which was once again won by Gary Anger, comfortably over Stuart Walker.
The opening lap crash saw Adrian Blackwell and Leonard Meiers retire from the race, and Lance Jurgeleit was classified as a DNF, despite taking the chequered flag, as he failed to complete 75% of the race distance.
The final race had all the makings for a belter, with Hay and Kent side-by-side on the grid. Kent only had to finish inside the top three to claim round honours, while Hay was desparate to finish the weekend where he started, in order to minimise Kent’s championship lead going into round two.
Hay snatched the lead off Kent very early in proceedings and didn’t look back. Kent stayed with him for the entirety of the 15 laps, but was unable to make a challenge for the lead, and consolidated second, and secured the opening round of the season, with Hooper coming home in third, again, after the quietest, most uneventful run of any competitor all weekend, and perhaps the easiest third place trophy he’ll accept this season.
Hay claimed his second win of the weekend, and will hope for a retirement-free run in the next round of the series at Queensland Raceway. 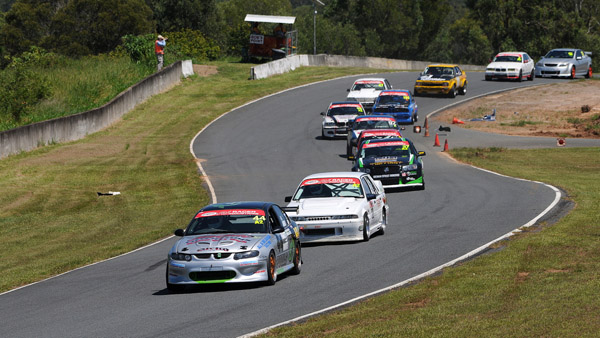 The front of the Class B field had a very different look to it, now that Gary Anger, Chris Begg and co were competing in Class A2, but they didn’t take anything away from the quality of racing the class provided across the weekend.
After a long summer of preparing his BMW for action, John Phoenix was thrilled to take an unexpected pole position, ahead of Andrew Knight and Shayne Melton.
When Race 1 came around, Phoenix lost the start, as Knight assumed the early lead. An early clamp down, for the stranded car of Shannon Cane, kept the field bunched. Cane’s Holden came to a halt as a result of the ongoing mechanical issues she’d been having with the Commodore in the lead-up to the meeting, and during Friday’s general practice as well.
When racing resumed, Knight gradually eased away from Phoenix, and continued on to score the first win of the season. Phoenix settled for second, while Mark Hyde came home in third, some seven seconds behind Phoenix, but three seconds ahead of Chris Holdt, in a race that saw the field fairly well spread out come the chequered flag.
After a strong performance in Qualifying, Shayne Melton was unable to convert that into a race result, as he retired on lap 5.
Knight cruised to a comfortable victory in race 2, finishing five seconds ahead of the rest of the pack. John Phoenix again lost the start, and then lost second place as well, as Mark Hyde snuck up the inside, in the Ford Escort.
Phoenix continued to lose ground as the race edged closer to its conclusion, with both Leo Graae and Mark Giorgio getting on by, as they secured third and fourth respectively. For Giorgio, it was just reward for the hard work and long hours he’d put into his Falcon across the week. He only arrived at the circuit in time to contest that second race. When describing the week that was, he stated “Anything that could go wrong did go wrong”, but he got there in the end, and the strong start was a very positive sign for the season ahead. 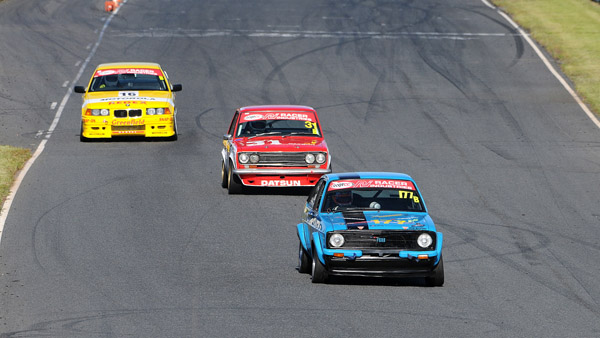 Shannon Cane’s hard luck unfortunately continued, as she was again unable to complete a lap, due to those ongoing electrical gremlins.
At the front, Knight claimed the win, ahead of Hyde, who was well clear of Graee and Giorgio, with Phoenix coming home in fifth place.
Phoenix, disappointed with his Race 2 result, was determined to redeem himself, and get back to the point end in race 3, and that’s exactly what he did.
Knight led the field away, as Phoenix quickly made his way forward, getting by Graae and Giorgio on the opening lap, and picked off Hyde on lap 4, to go to second. By that time, Knight had a handy buffer, but Phoenix chipped away at the gap over the remaining six laps, to be right
on his tail going into the final few corners.
In what was the closest finish of the weekend – a photo finish at that – Phoenix narrowly missed out on victory, as Knight claimed his third of the weekend, by just one-tenth of a second.
Further back, Leo Graae was third, ahead of Nick Linton, who came through from sixth to take fourth, with Mark Hyde finishing in fifth.
Shayne Melton did cross the line in third position, but was hit with a 30-second penalty that saw him relegated to ninth position.
Shannon Cane failed to finish, as to did Chris Holdt, who, like Cane, was yet to finish a race. The only difference was Holdt had manage to circulate for a few laps each time. Mark Giorgio was the other retirement in that third race.
In what had been, to that point, a character building weekend for Shannon Cane and her team, the young 17-year old had specialist electricians attending to her car between Races 3 and 4, in an attempt to solve those ongoing problems, in order to, at least, be able to complete a racing lap, and maybe the whole race if luck was on her side.
Off the start, in that final race, Phoenix and Knight resumed their duel, and for the opening half of it, Phoenix was as close as he’d been all weekend. On Lap 9, Phoenix’s opportunity came, and he pounced, diving up the inside, to take the lead off Knight.
Phoenix run at the head of the field was short-lived, with Knight regaining the lead on the very next lap. From there, Knight went on to complete his clean-sweep, but Phoenix couldn’t stay with him. A small mechanical issue saw Phoenix nurse his car to the chequered flag, but not before losing track position to Mark Hyde and Leo Graae, who completed the race 4 podium, ahead of Phoenix and Giorgio, who came home fifth.
Finally, some good fortune for Shannon Cane, as she made it to the chequered flag, albeit slowly, as she, like Phoenix, had to nurse the car home. It wasn’t such a memorable race for Les Hanifin, Steve Harris or Nick Linton, with all three failing to finish – a sad end to Hanifin’s first outing in his new car, and unfortunate for Nick Linton, who had been consistent all weekend, and was on-track for a top five finish.
Pole Position: John Phoenix (1:02.4543) Race 1: 1st Andrew Knight, 2nd John Phoenix, 3rd Mark Hyde Race 2: 1st Andrew Knight, 2nd Mark Hyde, 3rd Leo Graae. Race 3: 1st Andrew Knight, 2nd John Phoenix, 3rd Leo Graae Race 4: 1st Andrew Knight, 2nd Mark Hyde, 3rd Leo Graae. Fastest Lap: John Phoenix (1:01.9682 | Race 3 – Lap 10).
The Racer Industries Queensland Touring Car Championship now has a five-week wait until their next outing. Round 2 of the championship forms part of a massive program at April’s Ipswich Festival of Cars, which will be held, at Queensland Raceway, from April 20-22.